Denver has long been considered one of the nation’s up-and-coming cities, consistently attracting people from all over the world. The city’s appeal lies in its unmatched opportunities for outdoor recreation, interesting neighborhoods that boast unique personalities, award-winning restaurants, and eclectic watering holes.

Denver’s booming economy shows no signs of slowing down. Each year it attracts a variety of businesses, from Fortune 500 companies to grass-roots start-ups. Job opportunities are plenty, mountain adventures are a stone’s throw away, and a welcoming mindset supports Denver’s charming atmosphere.

The sports teams in Denver are a huge draw for residents. Saturdays take on a different energy when the Broncos or the Rockies are playing at home. Downtown is often flooded with a sea of orange or purple, depending on the season. Located just outside of downtown, the Pepsi Center is home to Colorado’s hockey team, the Avalanche, and basketball team, the Nuggets.

Denver’s craft beer culture made a name for itself decades ago thanks to breweries like New Belgium, Oskar Blues, and Wynkoop, to name a few. Evidence of Colorado’s ‘beer culture’ can be found in any Denver neighborhood— some even boast a brewery on every block!

Denverites truly know what it means to work hard and play harder. With the Rocky Mountains right next door, there are plenty of reasons to get outside. Locals can often be found heading west on Friday afternoons to spend their weekend in the scenic mountain towns. Winter brings ski and snowboard bums from all over the country, while summer is a magical season for white water kayakers, climbers, and hikers alike.

There is no shortage of rentals in Denver so natives and transplants have their pick. From modest, historic condos to high-rise, luxury apartments, each Denver neighborhood provides something different. As the rental market becomes increasingly competitive, apartment complexes are offering more enticing amenities and stellar rent deals!

Denver is high on the list for many people due to the high quality of life it provides. This beautiful city consistently attracts innovators, adventurers, artists, and more.

To learn more about the hottest Denver neighborhoods and which one might be best for you, check out our guide on where to live in Denver. 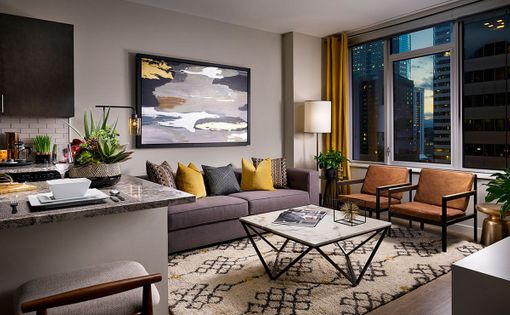 Downtown Denver has an open-minded, active vibe with overflowing energy at every turn. Its big-city spirit echoes that of Chicago or Atlanta, but with beautiful weather almost year-round. With 300 days of sunshine, residents cycle, walk to work, and keep outdoor restaurant patios full, no matter the time of year.

There’s something here for every hobby and you can always find someone to do it with. Meetups, hiking groups, and happy hours are full of like-minded locals! All of this fresh energy and perspective cater to the city’s welcoming vibe, and people quickly find a reason to call Denver their new forever home.

Cozy up over a cup of coffee at treasured neighborhood haunts like Pablo’s Coffee or Gypsy House Cafe. Afterward, head over to the Clyfford Still Museum or the Denver Botanic Gardens for a dose of culture and natural beauty. Some of the freshest sushi can be found at Sushi Den and reservations usually need to be made weeks in advance. Linger’s rooftop views are unmatched and its shareable plates are the perfect way to celebrate any special event.

If you live downtown, it’s easy to get around without a vehicle. However, mountain adventures require four wheels, and sometimes even all-wheel-drive. Parking in certain neighborhoods— we’re looking at you Cap Hill— can be a pain, but more and more apartments are beginning to offer secure parking options.

When it snows, it snows. Blizzards appear seemingly out of nowhere, especially in the springtime, and sometimes just a day after unseasonably warm weather. But unlike other northern cities, the snow usually melts under the bright Colorado sun within a few days.

What is the coolest neighborhood in Denver?

Capitol Hill. It’s close to downtown, has awesome historical buildings, and a vibrant past. Old trees shade the sidewalks and residents enjoy being able to walk to Cheeseman and City Park. Treasured restaurants like Bones, Vesper, City ‘O City, and Mizuna sit next to local dives like Charlie Brown’s Piano Bar and Benny’s Mexican Restaurant. The neighborhood is equal parts charming, gritty, and lovable.

What neighborhood should I live in Denver?

What neighborhood you live in Denver depends on a few things. Do you want a short commute into downtown? Are dog parks top priority? Need quick access to I-70 to shred all the powder your heart desires? Each neighborhood offers something different. Talk to a local expert who can help point you in the right direction.

What is a good salary in Denver?

A good salary in Denver averages $3,000 a month as a solo individual. This will provide decent, centrally-located housing and some extra money for after-work activities. However, most residents find that money gets a little tight in the winter. With ski passes reaching well over $500 dollars and even pricier gear, many Denverites choose to live with roommates. To live comfortably, two individuals living together and sharing expenses should make $92,000 annually, or $7,000 a month.

What are the best areas of Denver to live?

The neighborhoods close to downtown Denver offer ample things to do, parks to play in, and trails to stroll along. But as the city continues to grow outwardly, new suburbs and outlying metropolitan neighborhoods are being created. Just north of the Central Business District you’ll find a few of Denver’s most popular neighborhoods: the Highlands, West Highland, Five Points, River North, and Berkeley. South of the CBD also boasts a collection of interesting neighborhoods including South Broadway, Baker, and Wash Park.

Does Denver have good public transportation?

While Denver doesn’t boast public transportation systems on the level of Chicago or New York, it is improving. Denver’s Regional Transportation District (RTD) provides Denver with bus and rail services all over the city. Union Station serves as the city’s transportation hub, you can even take light-rail to Denver International Airport. Local rides are only $3, regional $5.25, and to the airport will cost you $10.50. 10-ride and monthly passes are available as well.

We’re biased, but it’s pretty fantastic. Vibrant energy fills the central neighborhoods while chill, mountain vibes can be found in the nearby towns of Evergreen, Georgetown, Idaho Springs, and Boulder. Delicious, innovative restaurants are on every corner and activities abound. The active lifestyle keeps residents healthy and happy.

What should I know before moving to Denver?

It’s possible to get by without a car if you live downtown, but the public transportation system has some catching up to do in order to compete with cities like Chicago and New York. Rent prices are seasonal; You’ll find the cheapest prices in February, and the most expensive mid-summer. If you don’t already have a dog, you’re likely to get one as soon as you move to this pup-centric city.

Why move to Denver?

Move to Denver if you want to enjoy all the benefits of a big city without being stuck in downtown Manhattan. Its history as a product of western expansion provides a different vibe than the east coast’s major cities. Plus, the mountains are only about 45 minutes away. Small towns in the foothills like Boulder and Golden provide a quick getaway and break up the monotony of living in acity.

Why is Denver so expensive?

Denver’s proximity to the mountains, booming economy, and vibrant downtown are all attractive to those wanting a well-balanced, big-city experience. As more and more people move here, the housing supply just can’t catch up to the demand.

Who are Denver's pro sports teams?

What is your budget?

Find your dream apartment with zero stress and VIP service!