Chicago has been on the map as the “Midwest Mecca” since 1833. What was once the passageway from east to west, is now a cutting-edge city nestled in the center of the country. Built on innovation and industry, Chicago continues to grow as new start-ups and technology companies fill the downtown district. Google, for example, recently set up its Chicago headquarters in the West Loop neighborhood.

Chicago is also considered the creative center of the midwest. Imaginative minds flock to the Windy City for artistic opportunities and some of the best art schools in the country. Over the years, this population has left its mark on Chicago’s aesthetic. Famous artists color the walls of otherwise ordinary-looking buildings, and sculptures can be found peppered throughout the local parks. It’s impossible to go far in Chicago without seeing some form of creative expression.

Somewhere between the harmonious blend of artistic vision and business-minded innovation, a multitude of small and fresh-faced companies find their home in Chicago. From holistic health stores and yoga studios to local boutiques and watering holes, this city has a network of niche storefronts just waiting to be discovered. Not to mention the unrivaled food scene! With a melting pot of cultures within the city limits, any type of craving can be satisfied here. 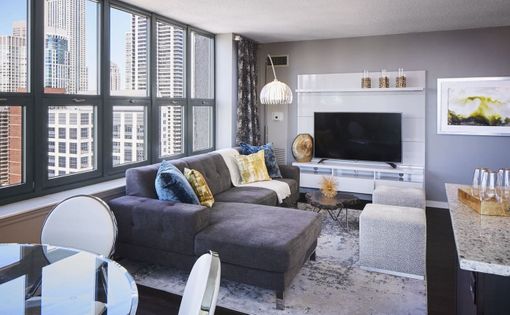 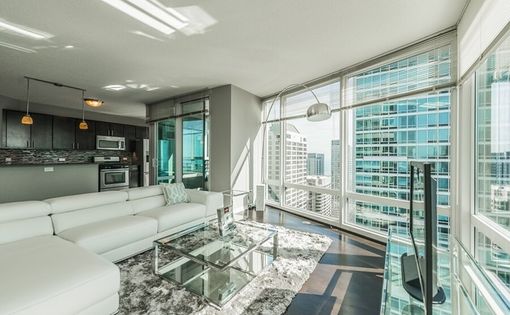 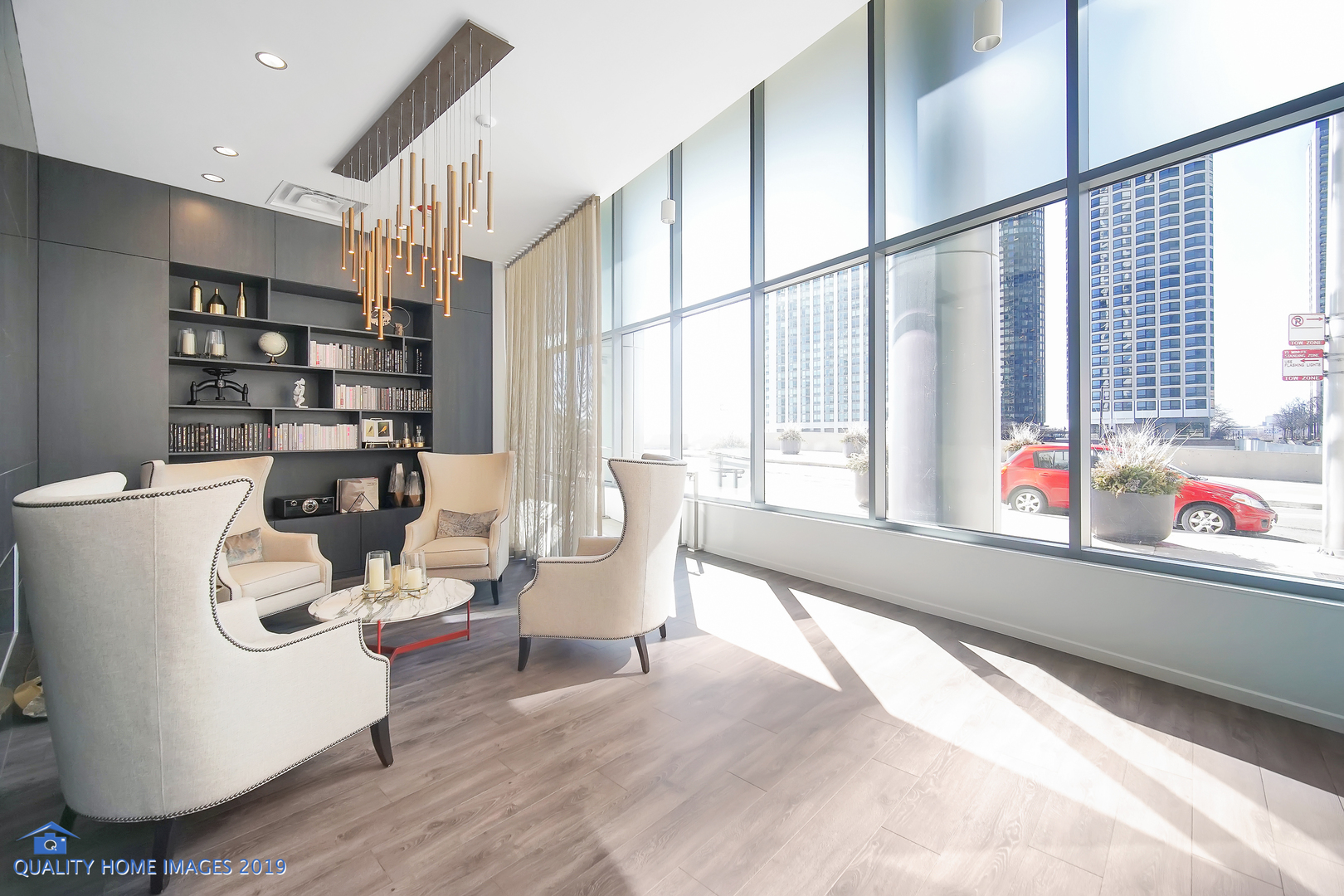 Pricing, availability, and concessions are subject to change at any time and without notice. Photos may be of various model units and apartment availability and lease terms may vary. Information is believed to be accurate, however is subject to errors and omissions. The accuracy of all information, regardless of source, including but not limited to square footages and lot sizes, is deemed reliable but not guaranteed and should be personally verified through personal inspection by and/or with the appropriate professionals.
Listings with the Broker Reciprocity thumbnail logo are part of the MRED data exchange program provided courtesy of the listing office displayed on the listing page of AptAmigo.

The vibe of Chicago lies in the sweet spot between individuality and community. This city pairs a classic Midwestern friendliness with a focus on networking and career advancement. There is a strong reverence for Chicago’s history and architecture, but also a booming community involved in change and growth. People come to Chicago to immerse themselves in a bustling city and enjoy the opportunities it has to offer.

Your first visit to Chicago calls for all the must-see spots: find a rooftop to view the downtown skyline, grab a beer at Goose Island Brewing, and spend a day at the Shedd Aquarium. But don’t think that’s everything you need to see! There is a mile-long list of hidden gems nestled throughout the city. Check out the oldest jazz bar in the city, the Green Mill, located on the north side.

Enjoy some of the best Thai food at Tac Quick, just outside Wrigleyville. Stop in for a rooftop cocktail at the J. Parker, located atop the Lincoln Hotel. Then, finish your day with a walk through the Lincoln Park Zoo— offering free admission year-round! From foodies to outdoor aficionados, there’s a little something for everyone in Chicago.

The most important thing about living in Chicago is that the Chicago Transit Authority (CTA) rules all. Many residents choose to leave their cars behind due to heavy traffic, expensive parking, and accessible public transportation. A lot of people bike during the warmer months, so always be sure to check your side mirror before getting out of an Uber! The cost of living in the city is, not surprisingly, higher than the surrounding areas. However, average salaries rank higher than many other cities, and infinite opportunities for career advancement help make the price tag a bit more manageable!

Use our Ultimate Chicago Neighborhood Guide to choose which neighborhood is best for you.

What are the different neighborhoods in Chicago?

That depends on who you ask! A city ordinance (that is largely ignored by its citizens) noted that there are 178 neighborhoods in Chicago. However, there are 77 communities that are widely accepted by residents. River North, South Loop, and Streeterville, The Loop, West Loop, and Printer’s Row are just some of the different neighborhoods in Chicago.

What is the smallest neighborhood in Chicago?

Chicago’s smallest neighborhood is the Villa District, located in the northwest part of the city. Built by architects who were inspired by Frank Lloyd Wright, the majority of the houses in this neighborhood are eclectic, bungalow-style homes. Villa District is an adorable, niche neighborhood worth taking a stroll through!

What is the largest neighborhood in Chicago?

How did Chicago neighborhoods get their names?

Chicago neighborhoods got their names during the first few years after it became a city. As the population boomed and transplants moved in, neighborhoods like Ukrainian Village and Chinatown were named after the origin of their residents. Areas like West Loop and South Loop were named after their relation to the downtown railway system, which formed a loop around downtown.

What is the oldest neighborhood in Chicago?

The oldest neighborhood in Chicago is, appropriately, Old Town. Established as the first residential neighborhood in the city, Old Town actually predates the grid system that was established in 1909. Looking at a map, you’ll notice that Old Town’s streets run diagonally, and do not match the grid used by the rest of Chicago.

What is the most expensive suburb in Chicago?

The most expensive suburb in Chicago is Kenilworth. This neighborhood is located in the northern suburbs and has a median home price of $1.24 million dollars. With a population of roughly 2,500 people, this neighborhood is both exclusive and expensive.

Where to stay in Chicago?

Where to stay in Chicago depends on your preference! For a lively nightlife scene with artistic influence, stay in Logan Square or Wicker Park. If you want a historical and unique experience, stay in River North or West Loop. Each neighborhood has its own unique vibe, you just have to find the right fit!

What is Chicago known for?

Chicago is known for attracting creative types, and for its industrial, historic roots. With many small and exciting restaurants peppered throughout, it has also become a destination spot for foodies. And who could forget its rivaling baseball teams? Chicago is known as the home of the Cubs and the White Sox.

What to do in Chicago?

With so many hotspots to choose from, there is never a shortage of things to do in Chicago. Check out the city from the Willis Tower’s Skydeck, or eat some of the best noodles around in Chinatown. There are so many chances to experience something new— even relaxed days can be spent at a beachside bar or strolling through Millenium Park!

What is a trending Chicago neighborhood to live in?

The best part of Chicago to live in is the West Loop neighborhood. Originally an industrial meatpacking district, West Loop is becoming a tech hub for startups and Fortune 500 companies alike. With beautiful lofts, amazing views, trendy restaurants, and a straight shot onto Interstate 90— West Loop is the hottest place to be right now.

Does Chicago have professional sports teams?

Chicago is one of America's biggest sports towns, with professional teams in every major sport. On the shores of Lake Michigan is Soldier Field, where you can catch a home game of the Chicago Fire or the Chicago Bears, of the MLS and NFL, respectively. Baseball junkies have two choices, one on the Northside where Wrigley Field is home to the Cubs, while Guaranteed Rate Field on the Southside is home to the White Sox. Finally the United Center is home to the NHL & NBA teams of Chicago, the Blackhawks & Bulls. And don't forget the Chicago Sky, who just won the 2021 WNBA championship.

What is your budget?

Find your dream apartment with zero stress and VIP service!